And with effect from 1 July 2019, Sampension Administrationsselskab A/S has concluded an agreement with the Pension Fund for Technicians- and Bachelor of Engineering to undertake all the activities of the pension fund’s in relation to pension and insurance administration and investment management.

Ownership and Board of Directors

The Board of Directors has also appointed a chief auditor who is in charge of the company’s internal audit and the internal audit function. The company’s financial statements are also audited by its external auditors, PwC, appointed by the company’s shareholders at a general meeting. In addition, the company has delegated responsibility for a risk management function, a compliance function and an actuarial function in accordance with the EU Solvency II regulations. 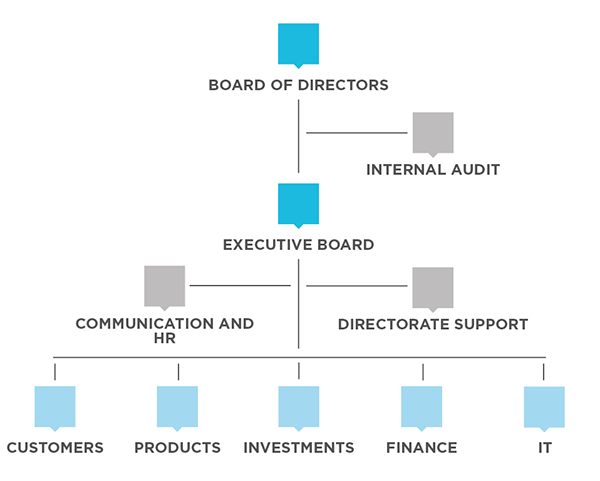 Powers to bind the company

The company is bound in legal transactions by the joint signatures of:

The entire Board of Directors may grant powers of procuration to other persons to bind the Company either jointly with a member of the Executive Board or jointly with another so empowered person, including for the sale and mortgaging of real property.

Sampension Administrationsselskab A/S manages the investments of Sampension Livsforsikring, The Pension Fund for Technicians- and Bachelor of Engineering (ISP), The Architects’ Pension Fund (AP) and The Pension Fund for Agricultural Academics and Veterinary Surgeons (PJD). This is done under Investment Policies and Regulations approved by the respective boards of the four mentioned pension companies, which in turn are subject to Solvency II, including Prudent Person-requirements, and further Danish law.

To manage the interest rate risk related to the guaranteed and intended pensions Sampension and ISP manage separated liability hedging derivatives portfolios utilizing government bonds with long maturities, interest rate swaps and other derivatives. The investment portfolios of AP and PJD reflect the conditional guarantees embedded in the with-profit pension products of these two pension funds.

Derivatives are used to reduce investment risks, reduce pension liability mismatch risks, manage liquidity and, where relevant, as instruments for a cost efficient implementations of the investment portfolio.

What are alternative investments? 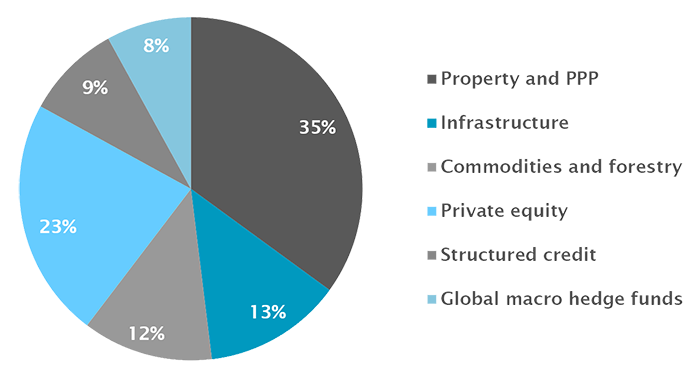 How does Sampension conduct its investments?

Sampension Livsforsikring A/S (Sampension) is the parent company of the group and invests directly in a range of financial instruments such as bonds, equities and financial derivatives as well as in property or other real assets. The group also invests in a range of externally managed investment funds.

Sampension organises its investments in a number of portfolios (internal funds) with specific investment guidelines. It has separate cash and custodial accounts for these portfolios, but they are all assets of the same legal entity. Similarly, ISDA-covered financial derivatives are booked in a number of these internal funds but are all operated under the same ISDA between each relevant counterparty and Sampension.

Komplementarselskabet Alternative Investments Aps operates under separate powers of procuration and special powers of attorney but is managed and administered by Sampension Administrationsselskab A/S.

3. Investment policy of Sampension concerning weapons
SAMPENSION does not invest in companies:

The rule of thumb of Sampension: What is in the best interest of the child.

According to ILO Convention No. 138 (1973), the individual country is in charge of specifying the minimum age for admission to employment or work. ILO has determined that this age must be not less than 15 years. In case of light work, the limit may be as low as 13 years. The Convention permits developing countries to specify lower minimum ages; 14 and 12 years, respectively. Even though Sampension generally supports these guidelines, we also acknowledge that in certain situations it is in the best interest of the child to contribute to the family income.

Sampension (as well as many others) distinguishes between child labour and child work, child labour being physically and/or mentally harmful to the child. Child work is not harmful, but might even be beneficial to the child’s development.

In accordance with the 1999 ILO Convention (No. 182) concerning the Worst Forms of Child Labour, Sampension does not accept child labour. There is, however, a grey zone between child labour and child work. When assessing cases in this grey zone, SAMPENSION attaches great importance to what is in the best interest of the child.

Sampension acknowledges that in certain situations, e.g. in very poor countries, a child’s contribution to the family income is necessary in order for the family and the child to survive. In such situations it would not be in the best interest of the child, nor the family’s, to prevent the child from working. In such situations the attitude of Sampension is that the employer must ensure that the work is not harmful or dangerous to the child. The employer must also make sure that the child is not prevented from attending school if the child has access to a school. Sampension will also urge the employer to sponsor local schools and other kinds of education. In the long run it will benefit the employer to have a better educated labour force.

Finally SAMPENSION finds that the employer should hire the parents rather than the children if possible in any way.

Equality regardless of sex, race and religion
Decisions on employment, dismissal, promotion and the like at companies invested in by Sampension must be based solely on qualifications. This means that there must be no discrimination due to sex, race or religion, in accordance with ILO Convention (No. 111) concerning Discrimination in Respect of Employment and Occupation (1958). SAMPENSION also expects the companies not to discriminate any disabled fellow human beings. Positive discrimination is, however, an exemption to this rule.

In accordance with Article 23(2) of the Universal Declaration of Human Rights (1948) and ILO Convention (No. 100) concerning Equal Remuneration (1951), SAMPENSION also expects equal pay for equal work, regardless of sex, race and religion.

Labour rights
The individual’s right to be a member of a lawful trade union
Sampension supports Article 23(4) of the Universal Declaration of Human Rights (1948), which lays down that everyone has the right to form and to join trade unions for the protection of his interests, and ILO Convention (No. 87) concerning Freedom of Association and Protection of the Right to Organise (1948).

Sampension also supports ILO Convention (No. 98) concerning the Right to Organise and Collective Bargaining ((1949), which lays down the following (quote):

The same principles are supported by ILO Convention (No. 154) concerning Collective Bargaining (1981).

Certain industries, such as the oil industry, are characterised in that their products as well as the extraction and refining process of oil, are polluting. When investing in such industries, we aim to avoid the least environmentally conscious companies.

Manufacture of weapons
Anti-personnel mines strike entirely arbitrarily and they severely affect the civilian population of the affected territories. In accordance with the so-called Mine Ban Convention (Ottawa, 3-4 December 1997, signed by Denmark and ratified on 8 June 1998; acceded to by a total of 147 countries world-wide), Sampension does not want to invest in companies that manufacture anti-personnel mines or their components.

In accordance with the UN Conventions concerning weapons of mass destruction:

Sampension does not want to invest in companies doing research in, producing, supplying parts for, transporting or otherwise promoting the development and proliferation of biological, chemical or nuclear weapons.

Sampension expects the companies we invest in to comply with applicable legislation and international rules and standards, including the OECD Action Plan on Base Erosion and Profit Shifting (BEPS) and the European Commission tax transparency initiative. This expectation applies regardless of corporate setup or organisation, allowing for any specific modifications in this respect. Our expectation applies with respect to Sampension’s investments in both equity interests and debt instruments.